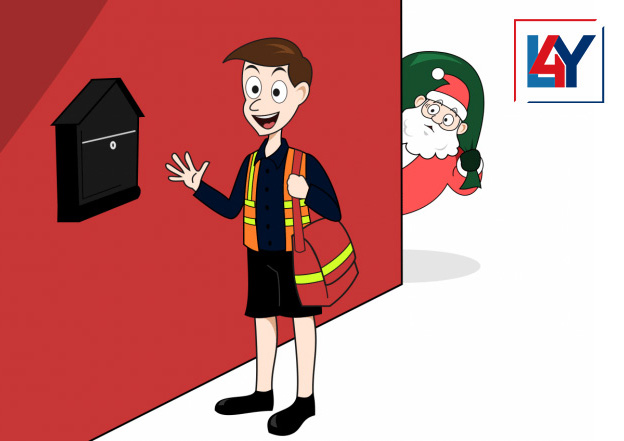 Gordon the Postman was making his way up Greenhill Lane. The houses in this street seemed to have a competition to see who could put up the biggest, brightest and flashiest Christmas decorations. Number Ten was probably the current winner, Gordon mused, they had a lawn full of plastic elves with parcels, an entire team of light-up reindeer galloping across the roof and a blow-up Santa of quite epic proportions poking out of the chimney.

He trotted across the lawn with his stack of mail, popped it through the letterbox and went back to his van. He repeated the process at numbers twelve, fourteen and sixteen finding on his way a collection of fairy lights, tinsel, another Santa and few stars. “I love Christmas”, he thought, humming something that may have once been Slade.

At the top of the road, he drove his van into the garden centre and went in to the shop with their letters and a parcel.

As he approached the till he said

“Sandra, I’ve got your post. Would you do the honours?”

“Oh” she said, looking at the address on the third one “you’d best take that one out the back, that’s for Santa. He’s just setting up in the grotto. Go through.”

“No problems” and Gordon set off through the shop to the Christmas area at the back.

“Hello?” he hollered as he entered the covered over, snowy cave that was the centrepiece of this Christmas extravaganza “er, Santa?”

There was no answer, so he stuck his head in gingerly, not wanting to catch the big man in the middle of getting changed.

As Gordon went into the little grotto, he saw Santa perched on his big chair clutching a takeaway coffee. Santa saw him looking and winked “Got to set myself up for the day! Lots of children to see and wishes to grant, you know.”

“Of course. Can’t beat a good kick of caffeine.  I’ve a letter here for you.”

“How strange. Normally people write to me at home at the North Pole. What a relief it found me here!”

“Er?” said Gordon, not wishing to be rude.

“Er” said Gordon again, feeling that perhaps he needs the coffee more than the jolly man in front of him. Or maybe a mulled wine. Was it too early for a small eggnog?

“Have you put your order in yet?”

“You are a man of very few words aren’t you Gordon? I had you down as a lot more talkative. Never mind though. Have you put in your Christmas list? Popped it up the chimney maybe?”

“Er. No. Not really. Thought the wife might get me some new socks maybe.”

“Oh, well, very practical I’m sure, the mileage you do. But what does your HEART desire?”

“Think on it Gordon! There’s no time to lose! I want you to shake my hand (you’re a bit old for sitting on my lap) and whisper in my ear something you’d like.”

“OK” said Gordon, feeling like a complete idiot “I’d really like an SD2T, with newspaper holder.  I see so many lovely individual post boxes on my rounds.  I’d love one for my place.  It’d really make the porch look brilliant and stop my newspaper getting all mangled as it is wedged through the door by that young paperboy who clearly isn’t destined for a glittering career in distribution.”

“Is that all?” Said Santa “Think big Gordon, why wouldn’t you want an SD3T? More space, great colour?”

“You’re right, I just wouldn’t want to be greedy”

And Gordon went out into the Garden Centre, dazed and not a little confused and went on with his rounds.

Now elves of course are very clever and make all manner of things. But they are also geniuses in the art of outsourcing. They keep it very quiet, it’s not good for PR, but you should know that occasionally, when they want expert help with a specialist post box, they have been known to drop a note to the team at Letterbox4You to see if they can help.

So, it won’t come as too much of a surprise to learn that Gordon did wake up on Christmas morning to a shiny black SD3T post box (with newspaper holder).

Oh, and some socks.

Merry Christmas!
From all at Letterbox4you

Use a social account for faster login or easy registration.